First experience as a college football photographer | ECU vs UCF

When I first became a photographer in 2015, I didn’t know exactly what I wanted to do with photography, let alone that I would even want to photograph college football. Not only that, but almost eight years later, I’ll still be doing photography. Coming into photography, I had a cheat code due to being very technical, thanks to being a computer programmer. It gave me the edge to research sources to determine which sources won’t be trustworthy and dependable. So I could see the different forms of photography and also got to see what forms of photography resonated most with me. At first, look when I saw sports photographers, it didn’t seem appealing to me as I wasn’t deep into sports. But then, one day, my sister asked me to come and take photos at my nephew’s football game at Rose High School.

Without knowing much about sports photography, I contacted a good friend of mine, Carla Williams of Captured By Carla Photography, as she was someone I looked up to when it came to certain aspects of photography, especially sports photography. She advised me on what to do and what not to do, and from there, I fell in love with capturing the raw emotions displayed during football games.

Five Years? Why so Long?

Over the next five years, I would photograph many high school football, basketball, and even a few soccer games. As fun as that was, I would typically run into many issues, not with capturing the game itself but things like; Bad lighting, legal aspects (some parents not wanting their kids photographed), and bad environment in general. So I began to contact East Carolina University regarding photographing some of the games there. Of course, I wasn’t going to charge or ask for compensation, as I was starting out and just wanted the experience of being on the field. But after numerous posts, emails and calls, I didn’t even remotely get close to receiving a media pass to capture the football game on the field. Believe it or not, getting onto the ECU football field as media for any college is not that simple.

Due to many safety reasons, you must have a special media pass from the company you work for, or you would have to know someone who could vouch for you. Along with that, you would have to prove that you know what you’re doing and that you weren’t just some random person that planned to get a job with the media to get on the field to do something malicious to one of the players or couches.

How did I make it here?

Along with capturing different high school football games, I also did various types of photography and branched out to cinematography. Which in return also granted me different connections with people that had ties to ECU and other colleges. It wasn’t until I took headshots from ECU graduating med students. From there, I was allowed to photograph the ECU cheerleaders. After photographing the ECU cheerleaders, I was then in contact with the one person who gave the passes out to the media when they wanted to capture any ECU sporting events, including college football. It just so happened there was an ECU game the same week, ECU vs. UCF.

As I’d never been to a college football game, I didn’t know what to expect. First thing first, I wasn’t aware of how much security you would have to go through to get into the gate when a college football game is happening. Once I got past the security and got into the stadium, I met up with my friend, Carla Williams, as she photographed many ECU games and understood the dos and dont’s. Who knew there was a media room where all media and press could eat and relax before, during, and after the game? Once we made it to the field, I lit up like a little kid walking into a candy store selling toys.

Was it Worth The Wait?

Without hesitation, I can say that it was worth the wait! My next goal is to make it to more college games and next to NFL stadiums to maybe, in my spare time, do photography for the Carolina Panthers or even The Golden State Warriors. I have to be patient and consistent in making moves toward my goals. 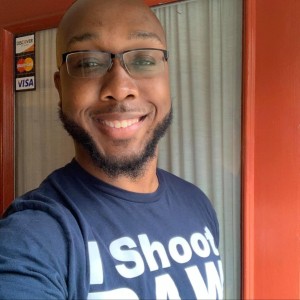